The Art Of Landscaping Your Garden 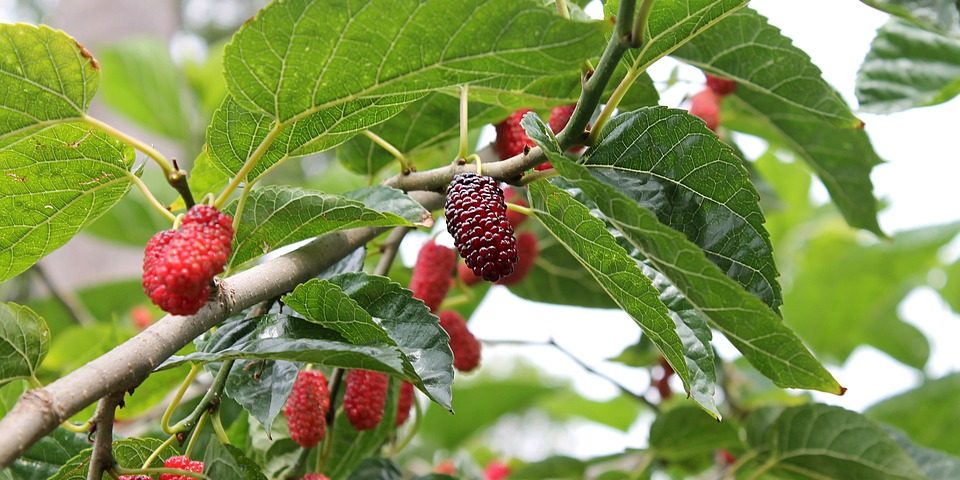 Mulberry trees were well known in the ancient civilizations of the world. They were famous fruit trees, because of the delicious berry fruits that were abundantly produced by fast growing trees—loaded with huge green leaves that were eaten by livestock, along with the berries, and the leaves were used in the Orient to fatten silkworms for the silk trade. General Oglethorpe, in 1733, imported 500 white mulberry trees to Fort Frederica in Georgia to encourage silk production at the English colony of Georgia.

William Bartram, the famous early American explorer and botanist, described his encounter with mulberry trees near Mobile, Alabama, in his book, Travels, in the year 1773.

Mulberry trees were planted in the landscape of President Thomas Jefferson 20 feet apart, and the fruit trees lined both sides of the road that extended around the house at Monticello, Virginia.

The silk trade was extremely important in the ancient civilizations in exchanges of fabrics, rugs, etc. The caravans of camels that traveled the “Silk Road” from Turkey to China brought world civilizations in contact with many valuable products back and forth to be traded, one of the most desirable and important products was silk. The mulberry trees, ‘Morus alba,’ were most desirable for silk production and gradually were filtered from Oriental societies to European fields. Many of these mulberry trees are grown today in Turkey, from where the famous Turkish silk carpets are distributed throughout the world.

Early Americans such as General Oglethorpe hoped to establish the silk industry in the American debtor colonies, but the project was destined for failure for many reasons. The mulberry trees are very fast growing fruit trees, and many farmers in the United States and other countries are hoping to profitably grow the trees for the production of human and livestock food. The wood of mulberry trees is very soft and is used for many purposes in many nations, but not extensively in the United States.

The white mulberry, ‘Morus alba,’ with the extremely large crop production of these trees has been observed growing as a fruit tree in North Carolina according to researcher, Russell Smith, in Tree Crops: A Permanent Agriculture that: white mulberry trees planted by a farmer “who kept pigs and claimed that one-third their weight was due to the mulberries falling from the trees—about 625 pounds of pork to an acre on rather thin, sandy land with little care and no cultivation.” James A. Duke in Handbook of Energy Crops sees the mulberry fruit as a source of energy, “in South Korea on producing high yields of ethanol from mulberry trees.”

Mulberry trees are considered to be a very important fruit tree in gardens of the Orient, Europe and the Mideast, and since new hybrid cultivars have been developed recently, the demand for these trees has surged in the U.S., where the grafted trees are rare, expensive and difficult to obtain. New cultivars are adaptable throughout the U.S. except Southern Florida, California and Arizona, and some trees offer stainless fruit, early bearing, rapid growth and delicious berry quality on berries that dangle from the stems, some tasting sweet as honey. These syrupy sweet mulberries are used in Ice Cream, jams, jellies, beverages, pies, and as stuffing mixtures for game birds.

The fast growing mulberry tree can grow as much as 10ft in one year, and as a rule will bear a few berries the first year, some with the richness of sweet cherries. The berries ripen to a brilliant black color, or red, pink, or white and are delectably fragrantly sweet and about two inches long, like a cooling blend and taste of raspberry and strawberry. The mulberry is excellent for fresh eating and for cooking pies. Some mulberries when dead ripe are so soft that just picking them breaks the fragile skin, staining your fingers purple with juice. This means that as a commercial berry available from grocery shelves, forget it, but nevertheless: the mulberries only need to travel as far as your mouth.

This choice mulberry fruit is practically seedless with a crisp, sweet flavor when eaten directly from the tree. Every child in your neighborhood will learn when the berries from this outstanding tree are ripening in early May. Most cultivars of hybrid mulberry trees are well adapted in most areas of the United States.

The dessert quality berries are excellent and honey sweet for picking directly off the tree and contain high concentrations of fruity sugar that makes the berries useful to process for jams, jellies and pies. The mature height of mulberry trees is 30 feet.